Peter Odemark, General Manager at Danone, describes his career development after his MBA 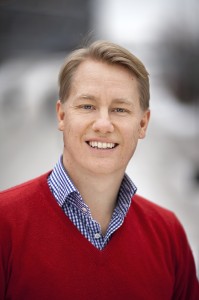 After my studies in Sweden, I worked in sales for the Coca-Cola bottler in Sweden. When I graduated from EADA in 2004, I joined the Coca-Cola Company European organization, where I worked in Marketing and New Business Development for four years. In 2007, I started at Innocent Smoothie in Sweden, a subsidiary of the newly started Innocent Drinks in the UK. In 2009, Innocent Drinks was sold to the Coca-Cola Company and I joined a local Swedish Dairy Group (Skånemejerier, now owned by Lactalis). Skånemejerier was the market leader in juices and I became the commercial director for the group and general manager for the juice division. In 2010, DANONE bought one of the factories and the biggest juice brand, ProViva (a probiotic juice drink). I then became the general manager for DANONE Sweden. Since 2013, I have been the general manager of DANONE Nordic Markets based in Stockholm, where I have been living with my wife and kids.

What happened when you finished your MBA?

I started working as a brand manager in Coca-Cola Nordics in Copenhagen. I was responsible for the Coca-Cola brand and a local soft drink brand. This was a good start for me in the field of strategic marketing.

What is your perception of the school like now, after finishing the MBA?

I’m very grateful for what I learned in my MBA in EADA and what it prepared me for later in life. I have great memories and only strong, positive feelings for EADA.

How useful was what you learned in the MBA?

Extremely useful, as it covered many areas of study that I had not covered before. At EADA, I understood what strategy really was for the first time. (I just thought I had understood it before….)

How useful has EADA networking been to doing business?

For me, not so useful. To be honest, I have not leveraged my EADA network directly in my work so far. EADA’s name has definitely been useful when applying for work as many of the recruiting directors that I have met know EADA.

How would you describe your experience at EADA? What was the highlight?

The whole year was great! I wish I could do it again!

Anna-Sophia Kouparanis, Alumna featured on the Forbes 30 under 30 list 2021