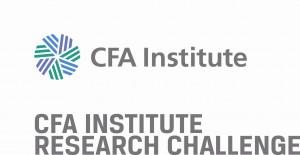 al final of the CFA Research Challenge was held at the Stock Exchange in Madrid on Tuesday 24th February. This global competition is one of the most prestigious finance competitions in the industry with more than 1000 universities and business schools around the world taking part.

Participants from the best schools are invited to compete with the objective of compiling a professional analyst report of a publicly listed company (this year: Tecnicas Reunidas). “The most valuable thing I’ve learned is that when valuing a company, there is much more to consider then strictly the numbers,” says Canadian Scott Pieschel, member of EADA’s CFA Challenge team. “An in-depth internal and external analysis of the company and thorough financial analysis must accompany the valuation.”

The local CFA competition (in Spain) attracted 20 entrants this year and the best 8 financial analyst reports were selected to compete in the final. The group representing EADA were hand-picked in October and worked on the report from November until mid-February.

Having spent over 1000 hours preparing the report, the group spent the week before the final preparing their presentation (including the 3 hours spent on the train on the afternoon before the final)! “The CFA Research Challenge helps you learn more about the ‘real’ financial world and is an amazing opportunity to test your public speaking skills in front of a big audience,” confirms German EADA team member Max Krack. We are pleased to announce that EADA’s team received second place in this year’s CFA Research Challenge. The team was made up of five participants from the International Master in Finance: by Marc Eduard Gelabert Martinez (Spain), Max Krack (Germany), Siri Kurada (India), Victor Alfonso Padilla Lemus (Colombia) and Scott Pieschel (Canada). “Participating in the CFA Research Challenge is a must for all future students of the International Master in Finance,” says CFA team member Victor Padilla from Colombia. “The amount of time invested is highly beneficial for professional development.”

Anna-Sophia Kouparanis, Alumna featured on the Forbes 30 under 30 list 2021