The team demonstrated a highly professional approach, making them stand out from others. The extensive research and hard work of the winning team conceived a profound knowledge of the topic, and generated insights about the valuation target, its industry and peers. The group used this knowledge as a basis for a very solid valuation through the application of state-of-the-art valuation and risk assessment techniques. The team was particularly skilled at integrating critical thinking into the project, ensuring it did not take on a descriptive format. Finally, the team presented the project in front of the jury and audience in a highly professional manner. Programme director, Nigel Hayes, confirmed that it was one of the best final projects he had seen at EADA.

The team approached the valuation report from a unique perspective. “Most valuation reports use simplified assumptions and generic financial models that do not appropriately reflect the intrinsic value of a particular stock,” team members said. “Our team decided to assess the financial worth of the company by using the latest advances in valuation and statistical techniques, such as multiple regression analysis and Monte-Carlo simulation. This allowed us to obtain a clearer picture of the company’s intrinsic value.”

To estimate Symrise’s intrinsic value, the team used a multi-stage discounted free cash flow valuation model, wherein different growth rates were used to model the different stages in the company’s and industry’s life cycle. The team employed different discount rates to better account for the changing risk profile of the company as it transitions through different growth stages.

Congratulations to all team members of the “Symrise AG – A Company Valuation” project. EADA’s best final project award for all classes will be handed out on November 18 at the 2016 EADA Annual Meeting. 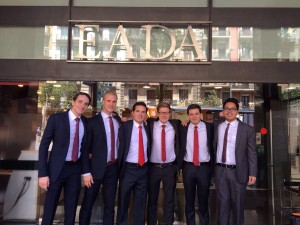 Evolution of Innovation Management. What does it take to move from a closed to an open innovation strategy?

Evolution of Innovation Management. What does it take to move from a closed to an open innovation strategy?