We interviewed alumni Titus Wittmann about his experience launching a tech startup. Titus is a graduate of EADA’s International MBA program. He co-founded Epiloge with his brother Axel Wittmann, who is an MBA alumnus from Cambridge Judge Business School. The company is currently based in Frankfurt am Main, Germany. Epiloge has recently launched its platform to the public and is in its initial growth phase.

Can you tell us a bit about Epiloge and what inspired you to create it?

Epiloge is a startup that focuses on presenting and organising the interesting projects, papers or presentations that students, academics and professionals work on, and allowing people to connect with others based on the work they read about or share. The idea for Epiloge was conceived back in 2017, when we realised that we had put a lot of time and efforts into various projects, presentations and ideas in our MBA programs and in our professional careers, but hardly any information on these efforts was available online.

As an example, my final MBA project at EADA was about a business plan strategy for an art verification company. Despite several months of work, our story and results couldn’t be easily found online, on our CVs or on any other site. Although the project was not readily available, we were sure that other students and experts in that particular field might be interested in reading and/or commenting on it or even connecting with us.

From the very start, we focused on building a beautiful design and an easy-to-use, intuitive multimedia editor. It allows descriptions to be done easily; you can upload files, invite contributors and allow comments. Also, in case a project or paper involves a team, it can have team members not just credited, but also collaboratively work on a page. 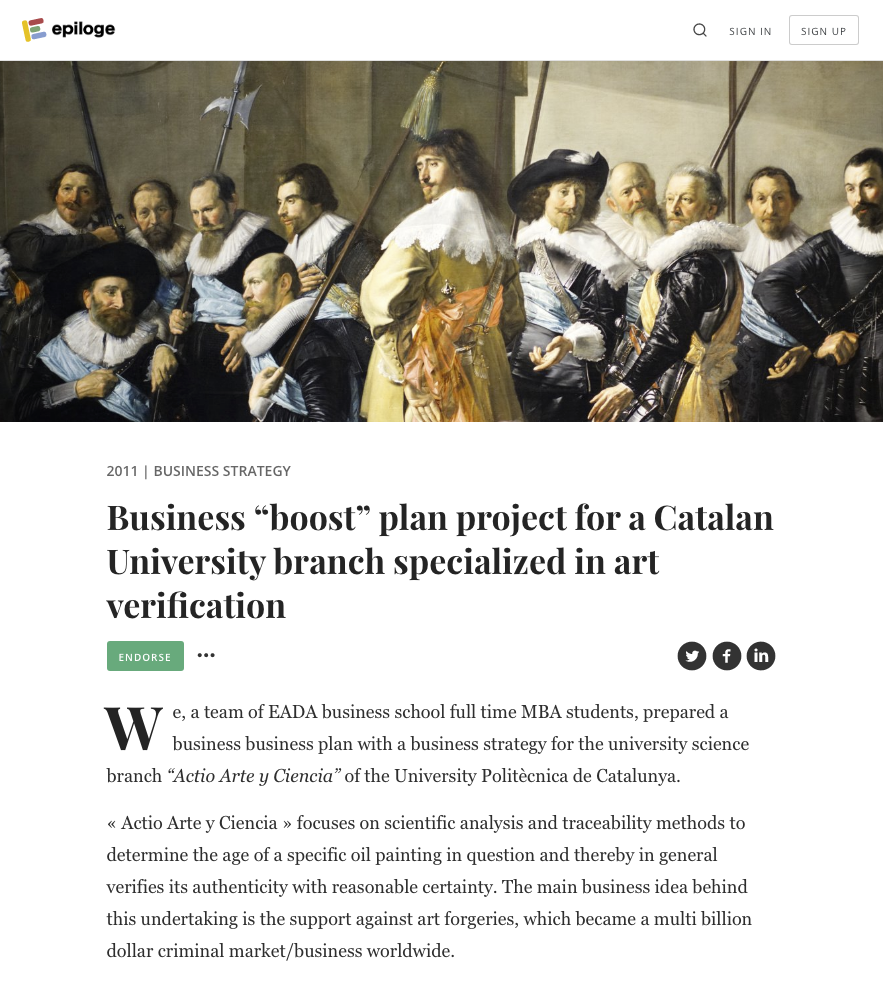 What were the main challenges you faced in the initial stage?

Initially, because Epiloge is principally a tech company, our main challenge was the time it took to create the software and design from scratch. As many startups do, we started out with good intentions to create a rather simple prototype, but realised quickly that our concept hinged on having an intuitive, well-designed way to write about projects and work products. So we ended up spending a lot more time than planned on the first proof-of-concept prototype.

The second big challenge we faced initially was getting adequate test feedback from users with a software that wasn’t finished. We solved that issue by a having several stages of test users – initially just a handful, but later we added nearly a hundred test users on a good stable version of Epiloge. At that point, we were able to get solid, real-life feedback that allowed us to launch the site to the public early in October of this year.

Our current main challenge is much more related to our MBA experience. We are focusing on growing our platform. It is now a hands-on job to use the skills from an MBA and really market a startup in its initial stage in the real world.

There is no golden bullet for growing a user-focused tech company, and we are trying different ways of having people to check out Epiloge. The lovely thing about marketing is that sometimes the most straight-forward word-of-mouth approaches are the best – for instance, we started our Tree Challenge in which anyone inviting a few friends, classmates or colleagues receives a personal tree from Treedom as a small token of appreciation.

How do you think new technologies will change the education sector and how students network and find opportunities in the future? Epiloge was designed to be part of the digital revolution we have been witnessing for the last 15 to 20 years. Young people, in particular students, have opportunities to network and gain knowledge that generations before theirs didn’t have. Despite these opportunities, their own work and accomplishments are still not adequately presented online.

For example, our own use of LinkedIn as MBA students and thereafter has always been about presenting where we studied and where we worked, while what we had actually done at university or in our professional lives was hardly ever reflected anywhere in detail.We think there is still enormous potential to create opportunities in the education sector. Our vision in particular focuses on helping students stand out more with what they actually do and accomplish and allow them to network with people they might not have approached or found anywhere else.

Do you have any advice for current EADA students who are interested in entrepreneurship and innovation?

Starting a business, any business, is hard. There is just no way around it, the only way to succeed is to be bold and try. Every startup is different; the only common denominator is that there are always tons of unforeseen challenges that you can’t know about before you start. However, we’ve found that for any problem, there is a solution if you start every day with the ambition to make your business better. If I could give one specific piece of advice for entrepreneurial-minded students, it would be to actually look out for other early stage companies like Epiloge. Check out how they started, analyse them, compare them and even try to reach out to them. Generally, have an open mind and see how real-world examples of entrepreneurship at the early stages work. We have learned a lot from this approach.

Alumna Estefanía Redondo in the grad program of Prysmian Group