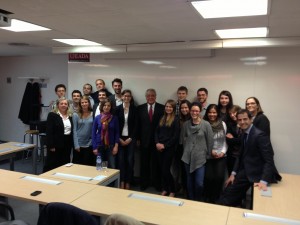 The closing lecture of the fifth edition of the Master in Hospitality Management was presented by a very special guest, Luis Marcó. Marcó has more than 50 years of experience in the national and international luxury hotel industry. He has been in charge of the opening and management of hotels including the Arts Hotel, hotels of the Ritz Carlton chain and the Mandarin Oriental in Barcelona.

Marcó focused his talk on the most important aspects of his management, namely, the human resources. He recommended that participants should always surround themselves with professional personnel and avoid mediocrity. Marcó also emphasized the importance of working well recommending the future professionals to become the best in their fields.

Marco’s presentation highlighted the difference between a manager and a leader. “A manager manages, but a leader inspires,” he confirmed.

Luis Marco is founder and president of Marcó & Asociados

Marcó & Asociados is a leading firm in the hotel consulting services, born from the experience and long career of its founder and president, Luís Marcó. He has worked in several luxury companies, such as Princess Hotel, Ritz- Carlton LLC and Mandarin Oriental, Barcelona.

He has led great hotel projects in Switzerland, France, United Kingdom, the Caribbean and the United States among other countries. In Barcelona, he has managed Le Méridien and Arts (from 1992 to 1997 and from 2000 to 2002 respectively) since he returned to Cancun (Mexico) to overcome Ritz- Carlton after Wilma hurricane. In 2007, he came back to Barcelona to open the first hotel of the luxury hotel chain Mandarin Oriental Hotel Group.

EADA congratulates FCB from the classroom