EADA Students Find Solutions for Mobility, Wellbeing, Health and the Home at Imagine Internet of Things

At the end of February, EADA students completed the first edition of the Imagine Internet of Things (IoT). Imagine IoT is an initiative launched by the Imagine Creativity Centre in Silicon Valley, whose mission it is to change the world through disruptive ideas and multidisciplinary teams. In the IoT programme, companies presented a unique social challenge to four teams.

EADA students worked as business developers in all four of the proposed projects. The programme took place over 4 months and included mentoring by entrepreneurship experts, workshops, and masterclasses.

Autopistas (an Abertis Group company) presented the team with the challenge of developing an IT solution that would enable them to maximise road safety for people on motorways.

The team suggested an innovative solution called SafeBeat, a device designed for drivers stranded on the hard shoulder. At the press of a button, it sends the location to the Motorways Control Centre, gives precise voice instructions to maximise safety, and warns other drivers on the motorway to slow down.

International Master in Management alumna Clara Remacha took part in this challenge. “It’s a project with a great deal of potential and could have a very quick time to market,” Clara pointed out. “This experience made me understand the impact that IoT can have on any business. What we are talking about is a new model of efficiency. In an ‘efficient’ company, everything will be connected and machines will talk to and learn from each other.”

MBA Part Time alumna Carmen Delgado took part in this project. “We have developed an adrenaline solution that any person can use in an emergency,” she explains. 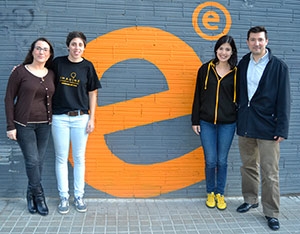 For Carmen, the prototyping phase of the project was critical, as it was the moment when the expertise of each team member came into play.

Grupo Cosentino presented its team with the challenge of designing and developing the kitchen countertop of the future, the Silestone 2030. “We spent a lot of hours discussing ideas and possibilities, investigating and prioritising, until we zoomed in on the problem we wanted to focus on,” says International MBA alumna Sindy Petoia. “We integrated the latest developments in the field of augmented reality and turned cooking into something easy and fun.” In her opinion, “the smart countertop is a real, feasible prototype that could rescue the tradition of cooking.”

After taking part in Imagine IoT, Sindy has made up her mind. She wants to devote herself to the Internet of Things.

Mattress manufacturer and distributer Dormity.com challenged its team to design a smart mattress that could gather information on people while they are sleeping in order to help improve sleep quality and, ultimately, quality of life.

Eduardo Pardo, alumnus of the Commercial and Sales Management Programme, participated in this project. Eduardo’s team developed sensors for the mattresses and the bedroom that measure humidity, temperature and breathing. “We saw that we could orient the sale of the product towards selling a service, paying for rest,” said Eduardo. “What’s more, we considered the possibility that users could share information related to their sleep on social media, and in this way promote healthier habits.”

For Eduardo, the project symbolises the change in business models that is being ushered in by the IoT. “This change provides companies with more information about customers and contexts, which will lead to higher levels of customer loyalty,” Eduardo predicts.