The Westin Resort, Costa Navarino: a leader in sustainable tourism 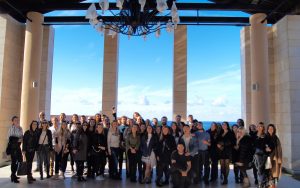 As a Tourism & Hospitality Management student, I was recently lucky enough to take part in a business trip to Greece organised by EADA Business School Barcelona. The trip was organised in partnership with ALBA Business School, a business school in Athens, where we spent two days participating in lectures and learning about the Greek tourism industry and the challenges it has faced following the financial crisis of 2008 as well as the issue of over tourism. We spent two days in the marvellous 5* Westin Resort, Costa Navarino, one of the biggest luxury resorts in Greece, with a more practical, hands-on approach to discovering the inner operational workings of a hotel. Located next to the Ionian Sea coastline of The Dunes Beach, Costa Navarino features 445 rooms and suites, and takes its architectural inspiration from old Messinian mansions, incorporating the surrounding natural landscape into its design.

During my time at The Westin Resort, I learnt a great deal about its dedication to functioning as a highly sustainable resort, not only as a fundamental design factor, but also in terms of operations. The resort has been recognised for its outstanding sustainability achievements on numerous occasions, winning a swathe of awards including Europe’s Responsible Tourism Award at the World Travel Awards 2017, the Gold Award on Sustainability at the Tourism Awards for Sustainability 2016, and, perhaps most impressive of all, it became Travelife Gold certified in 2015. This certification has been awarded to just 800 hotels worldwide meeting strict sustainability criteria confirmed through an extensive on-site audit of the resort. Managing Director of Travelife Nikki White believes that The Westin Resort has been crucial in the development of the region. “Costa Navarino has played a significant role in helping to develop and promote the whole of the Peloponnese region,” she says. “It has helped drive local investment, infrastructure and visitor numbers at a time when Greece has struggled economically. And at the same time, Costa Navarino has led the way in terms of supporting local people, local businesses and protecting the local environment.” The Westin Resort has taken extraordinary measures to maintain efficiency in respecting key social, economic and environmental issues. This includes ensuring that 70% of staff are hired from the local community, as well as buying 60% of supplies from local sources. The Resort’s presence has also had a huge positive impact on local businesses and has helped to increase the annual income of local restaurants by €2.35 million by increasing the number of visitors to the area by 80%. Establishing the ‘Navarino’ brand and product lines has also aided in promoting traditional Messinian food and culture internationally, and the creation of the Captain Vassilis Foundation has been instrumental in educating local farmers in best practices.

The construction of the Resort itself was also carried out with a focus on the environment, including the creation of the largest photovoltaic solar energy park in Greece, which generates surplus renewable energy that is diverted to the national grid. Not only that, but 16,000 ancient olive trees and 8,000 other trees were planted during the Resort’s construction, establishing a habitat protection programme for the African Chameleon and 271 bird species. The Resort also uses 100% renewable water sources in the form of local river runoff and an on-site waste water treatment plant for all irrigation.

Having seen The Westin Resort’s impressive commitment to economic, environmental and social responsibility first hand, it is fair to say that it is a philosophy that guides its every move. With the allocation of more than 10% of its staggering €550 million budget for the first phase of development, it was able to create the necessary infrastructure to continue sustainable operations. Combined with a series of environmental policies, the Resort is able to minimise its use of natural resources and preserve the biodiversity, all the while having a positive socio-economic impact on the local community.

Laura Isabel Allen Perelló was born in the UK and has Spanish nationality. She attended Bristol University where she gained a Bachelor’s degree in Politics. After several years of work experience in Australia and the UK, she realised that she was passionate about the hospitality sector. Laura is currently a participant of the International Master in Tourism & Hospitality Management programme.

Josep M. Coll: “The highest level of trust is when a brand speaks to the consumer’s spirit”