The annual local final of the CFA Research Challenge was held at the Stock Exchange in Madrid on Thursday, March 3. We are pleased to announce that EADA’s team received second place in this year’s local CFA Research Challenge in Spain. The team was made up of five participants from the International Master in Finance: Stefan Eder (Austria), Luis Mejia (El Salvador), Shaida Sylla (Ivory Coast), Dorian Berndt (German), Jose Christopher Nicolas (Philippines). 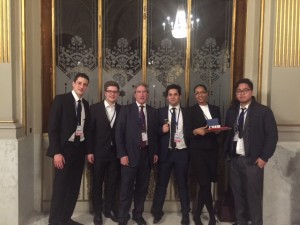 This global competition is one of the most prestigious finance competitions in the industry with more than 1000 universities and business schools around the world taking part. Jose Christopher would definitely recommend the experience to future students. “The experience of competing in such a global competition as well as the skills and knowledge that you learn make it all worth it,” he confirms. “This is a great experience that you won’t get anywhere else.”

Participants from the best schools are invited to compete with the objective of compiling a professional analyst report of a publicly listed company (this year Prosegur). According to Dorian Berndt, the most challenging part of the Competition was “realising that knowing the fundamentals of corporate valuation and setting up a model tailored to a differentiated company are two very distinct things”.

The local CFA competition (in Spain) attracted 13 teams this year and the best financial analyst reports were selected to compete in the final. The group representing EADA was hand-picked in October and worked on the report from November until mid-February.

Having spent over 1,000 hours preparing the report, the group spent the week before the final putting the final touches on their presentation. “The challenge is very intense,” says Stefan Eder, “but the participants gain a lot of experience in building an analyst report and, especially if your team goes on to the finals in Madrid, you can be proud of being part of this EADA experience.”