Boyd Cohen defends the power of cities as spaces for boosting innovation and entrepreneurship. 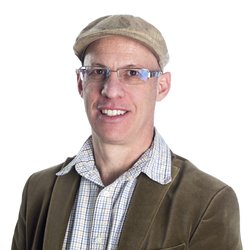 “Are you sure you want to go to Silicon Valley? Don’t be mistaken, this is much better…” Whilst Dr Boyd Cohen is saying this, he is seated with a carrot juice in front of him in a bar near Macià square and it’s Barcelona he’s referring to. “This city is full of spaces that are suitable for innovation,” he points out. “In Barcelona there are many co-working spaces, there are fab labs where you can put your ideas into practice, and the city has been on the cutting edge in areas such as civic entrepreneurship.”

The person he is speaking to doesn’t seem totally convinced, so Dr Cohen goes on. He mentions the case of Urbiótica, the Barcelona company specialised in the internet of things and urban technologies, which wanted to set up shop in Silicon Valley. “You know what they told them? You’ve come from Barcelona? But what are you doing here? We all want to be in Barcelona!”

Dr Cohen has just published “The emergence of the urban entrepreneur”, an essay that topped sales in recent weeks of publications on entrepreneurs in Amazon. In his book, this expert on urban strategies born in Illinois describes the potential that cities spaces concentrating talent and cooperation. “It is easier for state of the art projects to access capital and technology,” he says. “These are spaces where cooperation and the sharing economy arise naturally.”

Urbanisation, says Dr Cohen, has changed the world for good and for bad. In order to get a closer perspective, he has visited quite a few of the world’s large cities, always for work —research and teaching (he also worked three years for Accenture). Ha has been in Copenhagen, Denver, Madrid, Santiago de Chile, Vancouver (“a magnificent city but with very high rents”) and Buenos Aires (“a smart city in a stupid country”)… until he made up his mind to come to Barcelona. Dr Cohen sent an email to Xavier Ferrás, who had worked in Acció, and is now dean of the business faculty at the Universitat de Vic. He now teaches at Vic and EADA Business School. Behind all this work is economic backing from Ausa Futur, a business people’s association from the Osona region.

His choice of cities as future stages of economic change has led Cohen to question the Silicon Valley model and the corporate culture it has spread across the entire planet. “Silicon Valley is the complete opposite of a space designed for collaborating,” he says. “It is ugly and not at all appealing. It has no life. Everything is miles away. There are no common spaces.” What’s more, Dr Cohen describes Silicon Valley as a paradigm of “egoistic capitalism, a universe dominated by venture capital companies, which demand a speedy return on investments. It is that American obsession with making it right to the top.”

As far as Dr Cohen sees it, North American urbanism prior to the big 2007 downturn, those vast urbanised areas vertebrated by the automobile, known as “Suburbia”, are a thing of the past. “Cities are becoming more attractive for the people who live in them, in order to attract talent,” he says. “And on this road towards innovation, European cities have a lead over American cities. There is a lot more public commitment in Europe, more spaces for co-working, and fab labs. There is a greater community sense of things. The United States insists on monetising absolutely everything.”

In response to the objection that it is precisely this American model that is colonising the globe via the big e-platforms such as Uber, Airbnb and Amazon, and that this trend seems irreversible, Dr Cohen unfolds an imaginary map on the table. “That’s not exactly the way things are,” he insists. “If you look closely, you will see that there are loads of places where Uber finds it hard to operate because it creates resistance wherever it goes.”

Dr Cohen’s book, the prologue to which is written by the great advocate of urban diversity, Richard Florida, outlines the qualities that a city must have in order to stand out in this new scenario: good digital infrastructures (broadband), a high quality of life, accessible housing, an extensive public transport network, spaces for co-working and fab labs, universities and research centres.

And of course, a minimum size, which Dr Cohen sets at half a million people. But he is not totally adamant on this point. “Look at Sant Cugat, to give a close example. It is just ten minutes away from Barcelona by train. It is a pleasant city, with good restaurants, you can walk to work, there are lots of good schools…” In any case, as Dr Cohen explains, “Barcelona offers you the opportunity to set up a business without resorting to venture capital because access to talent is more economical than it is in other places.” For Dr Cohen, Barcelona is the smart city he has chosen to live in. Having said that, every time he goes to Vic to teach he has to take the local train service. For the moment, nothing can be done about that.

Dr Boyd Cohen has a doctor in Entrepreneurship and Strategy from the University of Colorado (Boulder, USA.). Boyd is an expert on entrepreneurship and sustainability, as well as smart cities and the sharing economy. Dr Cohen regularly publishes articles on these issues in Fast Company and Shareable and he co-authored the acclaimed book Climate capitalism: Capitalism in the Age of Climate Change.

Recently, Dr Cohen published his second book, The Emergence of the Urban Entrepreneur, which deals with the rise of local entrepreneurship in cities to address the social needs of citizens and take advantage of new opportunities based on sharing models and innovation tools.  Dr Cohen is also co-founder of Sharing Accelerator Barcelona, the first accelerator in the world for sharing economy startups.

'Effectuation': the art of the entrepreneur

How long will the 2020 Economic Crisis last? Speed does not Mean Precipitation.

'Effectuation': the art of the entrepreneur