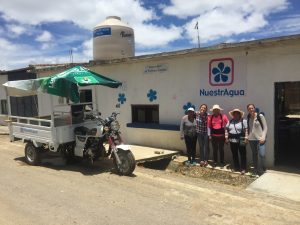 The Verano I in Chiapas is an academic programme with the objective of helping less favoured communities with the aim of training professionals, enabling them to understand the advantages of sustainability, ethical values and citizenship.

The programme is organised by Instituto Tecnológico de Monterrey Campus in Chiapas and uses the educational model TEC21, based on learning through real life scenarios. Thanks to the institutional relationship between EADA Business School and Instituto Tecnológico de Monterrey, EADA selected two participants of the International Masters programme to represent the school in Chiapas and apply their knowledge and experiences to the project about citizenship and safe water systems in rural communities.

During my master I´ve been taught how to increase sales, how to improve efficiency and how to spend less money on production to increase revenues for huge multinationals. Don’t get me wrong, I love business, but there was always that silent thought that something was missing.

In March, EADA offered a couple of scholarships to participate in an ITESM programme called Verano I in Mexico. This university organises a 4-week long community programme in the state of Chiapas for their students. The objective is boosting local projects to enrich the area through local entrepreneurship. Having the opportunity to visit a part of the country that was unfamiliar to me made me change my thinking of Mexico as a developing country.

I learned that Chiapas is one of the poorest states in the country, although it is rich in natural resources. More than 70% of its population, around 4 million people are in a situation of poverty of which 1.6 million are in a situation of extreme poverty. Chiapas is a state with great cultural diversity as it has the most indigenous population living next to cities and tourism. The main challenge in Chiapas is to transform its social diversity and natural wealth into healthy development without losing its particular personality. One of the most beautiful things I saw in Chiapas was its multiple lakes and huge waterfalls. Paradoxically, peoples’ access to clean water is very limited. Staying in San Cristóbal de las Casas, one of the biggest cities, we had no problem with it, but when we visited local communities, we realised it was a top priority problem. Many communities we visited did not have water pipes nor clean water systems. Instead, residents had to boil water to have access to “clean” water. This creates a window of opportunity for companies to sell clean water at high prices. Families that cannot afford bottled clean water often suffer from digestive problems, especially children who have weaker immune systems.

The Fundación Cántaro Azul turned this situation around to empower rural areas with the launch of NuestrAgua franchises. NuestrAgua franchises are owned and ruled by a group of locals with the objective of enriching their local community and at the same time, promoting the consumption of clean water thanks to their fair prices.

Cántaro Azul gave them a system to purify and clean the water so they can fill and sell the bottles on their own and manage the business without external help. Even though the main objective of the foundation is to enhance local entrepreneurship, our project there was to help them cut costs and increase sales.

We spent the firsts weeks trying to understand the community´s daily life so we could identify their priorities. We all speak the same language, although they had Tzotzil as their native language, but our ways of thinking and living are so different that we needed to make an effort to come out of our comfort zone. We had the opportunity to spend time around the families so it was easier to change our mind-sets. Talking to Neri, a 23-year-old father, around a table of tacos in a house made of sheet metal in Tziscao, a community 4 hours from the capital, made me realise that my conception of poverty and wealth was not as defined as I thought. He was sharing everything he had (his house, his food, his time and wisdom) with a group of strangers not because he was expecting anything from us but because it is his way of behaving. He told us he never considered himself or his family poor because they never experienced hunger. That statement sounded simplistic to me at the beginning because I thought life was much more than fulfilling physiological needs. What about education? Health? Self-actualisation? After some hours went by, I understood what he meant. He never considered himself poor because he is living the life of his parents, taking care of the land and culture he inherited. He may not have gone to school, but he is knowledgeable about the things that affect his environment. We are the same age but we are living such different lives. The concept of self-actualisation is very different to the both of us, but one is no better than the other is, it is just different. That took me weeks to understand (the situation in San Cristóbal de las Casas is a little different as the indigenous culture clashes with the occidental culture). I would like to think that I managed to get rid of the paternal ideology we Europeans have unintentionally when visiting developing areas.

After a few weeks, we developed a plan to lower costs and increase sales through a marketing plan that we agreed with the group of women responsible for the franchise. Unfortunately, we were not able to see the implementation of the project but we left having contributed a little and learnt a lot. During the project with Cántaro Azul, I had the opportunity to apply what I learned during the master to a good cause. I now believe that it is possible to apply business knowledge to make this world a better place.

A few days after I got back to Barcelona an earthquake shook Chiapas and twelve days later, another one shook Mexico City taking more than 300 lives and collapsing tens of buildings. The entire world watched Mexicans rise from the rubble and rebuild their cities with their own hands. I hope the feeling of community and commitment that appeared in Mexico never disappears and helps the country advance to a better future where individuality is non-existent amongst the community. Each of us can contribute to make the world a better or worse place. It is our choice. Choose wisely.

Maria Júlia Mas is an alumna of our International Master in Management, class of 2017. She is from Barcelona and has a background in political science and law.  Maria has collaborated with NGO’s at a local and international level and believes that entrepreneurial initiatives are a key factor to empowering communities.

The Marketing Challenge: a Marketing plan for Las Muns