EADA MBA participants Clinton Walker (Australia), Daniel Felipe Petro (Colombia) and Julian Schmid (Austria) returned last week from The Negotiation Challenge 2017 (TNC). Julian was inspired to join the team after a module in the EADA-Collabtó Residential Training Centre presented by Steven Gates, founder of The Gap Partnership, the world’s leading negotiation consultancy. “He emphasised that negotiation is fundamental to our lives and the way we distribute, create, protect, resolve and manage anything of value,” says Julian.

This year, TNC was held at the School of Management of Universidad de los Andes (UASM) in Bogota, Colombia. This is the first time the event has taken place outside of Europe, with the most recent Challenges being held in Austria, Germany and Iceland. TNC was founded in 2007 as one of only a few international negotiation competitions at the time. Participants are made up of graduate students in business or law from the best institutions worldwide. “I joined the team to have a shot at competing with –and learning from– students at the very best institutions in the world,” says EADA team member Daniel Felipe. “For people who love to negotiate, the opportunity to participate in TNC is the equivalent of playing in the world cup for soccer fans.”

TNC provides a forum for the world’s best student negotiators to hone and compare their negotiation skills in an effort to prepare them for the complex negotiations they face after graduation. “The most valuable thing I have learned is that you need to have your ego in check and focus on understanding the interests and priorities of the other party,” says Julian. “Furthermore, preparation is key – if you don’t prepare well, you won’t have a shot.”

The negotiation scenarios are specially designed to reflect reality, and offer an excellent opportunity to learn about diverse negotiation techniques as well as network with like-minded peers from around the world. According to EADA team member Clinton, the greatest challenge was “adapting to face teams that were strategically and culturally very diverse”.

TNC teams take part in four qualification rounds, with the best team advancing to the final to compete in front of an international jury composed of lawyers, business leaders and professors. During each round, teams take part in a role play incorporating integrative, distributive, mixed-motive and/or multi-party negotiations. “At TNC, I learned that there is no single way to negotiate, but rather an appropriate style for each situation,” said Daniel. 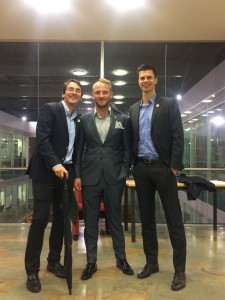 Teams are evaluated on their “negotiation intelligence”, or their ability to identify and apply the full spectrum of negotiation skills in the appropriate situation. Judges also evaluate participants’ communication skills as well as their ability to understand the interests and identify relevant issues. “The most valuable thing I learned was the importance of strategic planning prior to the negotiation and of adhering to the plan throughout the negotiation, whilst being able to adapt to unforeseen events,” said Clinton.

This is the second year that EADA participates in TNC, and is pleased to have placed among the top ten schools.

Anna Seidl: a big trend in the hospitality sector after Covid-19 will be personalization